Sorry! You missed Niall Horan with Lewis Capaldi and Fletcher at Amway Center 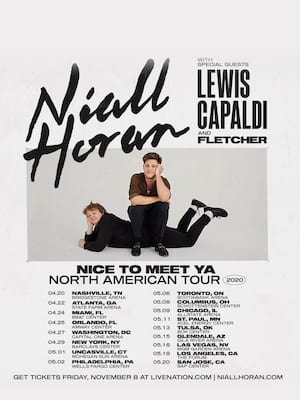 Why See Niall Horan with Lewis Capaldi and Fletcher?

Nice To Meet Ya Tour!

The bromance we didn't know we needed, Niall Horan and Lewis Capaldi are taking their friendship on tour for the world to see, oh, and their music! The best friends will embark on a 17-date trek in Spring 2020. Expect to see Niall performing tracks off his upcoming sophomore album, including recently released single 'Nice To Meet Ya' and Lewis Capaldi's smooth operator skills and voice, with tracks like 'Grace' and 'Someone You Loved'. Joining the duo on tour will be American singer, Fletcher, as the opening act.

Niall Horan rose to fame as one of five members of the notorious boyband, One Direction. Not soon after finishing third on the X Factor, One Direction's music and merchandise spread across the world and they became a household name. In 2016, the band took a hiatus and since then Niall has signed a record label as a solo artist and released hit singles including 'Slow Hands'.

Lewis Capaldi went from uploading music to SoundCloud, to being a seven-week chart-topping artist in the blink of an eye. It's not just his music that has stolen hearts, but also his care-free personality. Whether he's singing 'Grace' or breakthrough single 'Someone You Loved', you can always expect Lewis' personality to be the real star of the show.

Sound good to you? Share this page on social media and let your friends know about Niall Horan with Lewis Capaldi and Fletcher at Amway Center.