Sorry! You missed Battle of the Bands at Amway Center 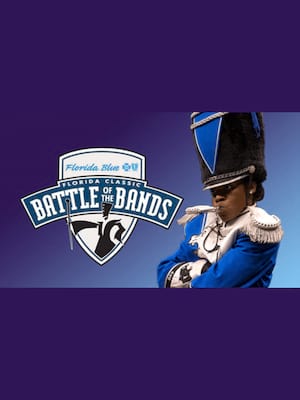 Battle of the Bands

Why See Battle of the Bands?

The phrase Battle of the Bands may call to mind sweaty dive bars, indie rock and morning-after tinnitus, but when it comes to marching band competitions, the stakes are higher, the drums are louder and the audiences are much, much bigger. Don't miss out on the annual Florida Blue Battle of the Bands this fall, featuring edge-of-your seat routines from the competing teams the Marching Wildcats of Bethune-Cookman and the Marching 100 of Florida A&M University.

Used on battlefields since ancient times, percussion and woodwind instruments were played to boost morale and muster soldiers. Formed in 1845, the US's oldest non-military marching band was formed to add to the spectacle of the great American past time of football with field shows, pictorial marching formation and fight songs - unique rallying cries/sporting anthems associated with contending universities.

Sound good to you? Share this page on social media and let your friends know about Battle of the Bands at Amway Center.