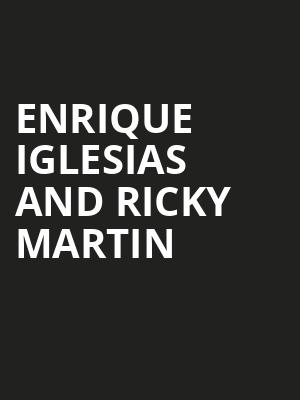 The two Latin legends hit the road on a brand new tour!

Latin pop heroes Enrique Iglesias and Ricky Martin are hitting the road this fall on a very special co-headlining tour! As two titans of Latin music, this hotly anticipated trek will see the pair join forces for the first time as they bring their biggest hits, and effortless charisma, to over 19 cities across North America!

Emerging into the Latin pop scene in the mid-90s both Iglesias and Martin can boast of huge commercial success, not just in their native countries but across the globe. With 18 chart-topping albums (which also include countless Platinum-selling records) between them, expect to hear mega-hits like Martin's synonymous belter "Livin' la Vida Loca" and Iglesias' worldwide number one, "Hero" on this major new tour. Keep your ears to the ground for new music too as both Martin and Iglesias gear up to release new material in 2020!

Seen Enrique Iglesias and Ricky Martin? Loved it? Hated it?

Sound good to you? Share this page on social media and let your friends know about Enrique Iglesias and Ricky Martin at Amway Center.