Sorry! You missed Jenny Lewis at The Beacham 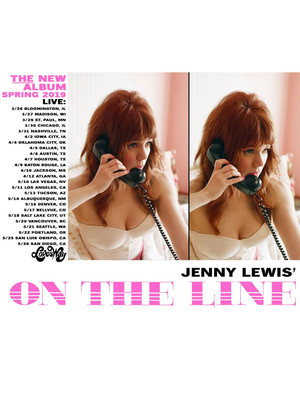 It might well be sixteen miles to the Promised Land, but Jenny Lewis brought paradise a little bit closer to home last night with a rip-roaring show

The Line Of Best Fit

A former child actress in the 1980s, Jenny Lewis turned to music to channel her disenchantment with Tinseltown into Americana-tinged folk-pop with an edge. Following her tenure as frontwoman for American rock outfit Rilo Kiley, Lewis explored new horizons on her debut solo album Rabbit Fur Coat in 2006, establishing her presence as a force to be reckoned with on the indie scene. Three albums and thirteen years later, the songstress is gearing up for a mammoth North American tour in support of the 2019 release of On The Line, the brand new album featuring fresh material and collaborations with the likes of Ringo Starr, Beck, and Benmont Tench.

Underpinned by catchy pop hooks and a powerful set of pipes, Lewis simply shines when the spotlight is focused on her. Commanding the stage with an old school sense of charisma, calling to mind the fierceness of Stevie Nicks in her prime, she effortlessly glides between keyboard and guitar, conjuring the alluring and hazy backroom bars of the '70s with tales of love, sex, drugs and rock 'n' roll (as glimpsed on smash hit, stand out tracks 'Rise Up With Fists', 'Acid Tongue' and 'The Voyager'). Don't miss the iconic singer-songwriter as she ascends to the next level with this latest offering.

Sound good to you? Share this page on social media and let your friends know about Jenny Lewis at The Beacham.