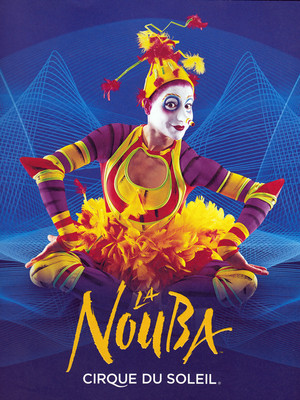 La Nouba surprises, delights or mystifies all members of the family.

Join the thousands of fans who leave this Cirque du Soleil performance in awe of the glorious feats and the inexpressible beauty they have witnessed, carrying with them its memory as an inspiration to celebrate life. It truly is a show that makes "the impossible, possible."

Its title derives from the French phrase faire la nouba, meaning "to party" or "to live it up". La Nouba is in permanent residence in a custom-built, freestanding theater at Downtown Disney's West Side at the Walt Disney World Resort in Lake Buena Vista, Florida. June 2009 saw its 5,000th performance since opening in 1998.

What To Expect From La Nouba

La Nouba let's you escape reality and leads you into the wondrous land of make-believe, a world beyond your imagination. La Nouba transforms the ordinary into the extra-ordinary from beginning to end with daring acrobatics including; aerial ballet performed in a could of flowing red silk. Vibrant music, magical choreography, and whimsical characters you'll end up forgetting that Disney World is on the doorstep.

La Nouba is for children of all ages. Children under 3 years old are admitted free, however they must remain on the lap of a parent at all times.

I was very fortunate to have seen La Nouba while in Orlando, Fl on a Disneyworld... more

Sound good to you? Share this page on social media and let your friends know about Cirque du Soleil - La Nouba at Disney Springs.