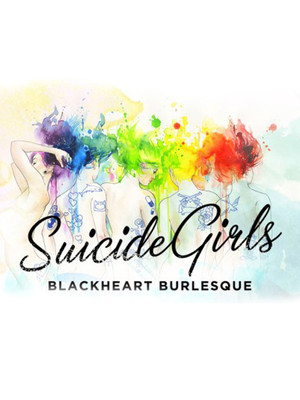 The nerdiest, sexiest show on earth!

A burlesque show with a nerdy twist, The Suicide Girls is chock-full of pop culture references and is performed to a a high energy indie soundtrack, showcasing sexiest choreographed strip tease in geekdom! Strictly for the over-18s, this strip-tease/burlesque performance has different vignettes paying tribute to cultural phenomena such Star Wars, Orange Is The New Black, Donnie Darko, Clockwork Orange and more! Devised by world-renowned choreographer Manwe Sauls-Addison, who has worked on the massive concert tours for artists such as Jennifer Lopez, and Lady Gaga. Originally a touring opening act for GNR and Hole during the early Noughties, they have since made a name of their own as one of the leading strip acts in the world.

Originally conceived as an indie concept movement online in 2001, millions of women embracing alternative and tattooed lifestyles contributed by sending in photos. Now with a global reach on social media, they are in the top 20 brands on Instagram, and 6.5 million Facebook fans, and have built a dance troupe to celebrate the female form in all its different visages.

Strictly for over-18s ONLY. I.D will be required for all patrons lucky enough to look under 21!

SuicideGirls has been putting a rock n roll spin on pin-up modeling for... more

Patricia: “Needs a lot of work- not recommended”

Sound good to you? Share this page on social media and let your friends know about The Suicide Girls - Blackheart Burlesque at Plaza Theatre.